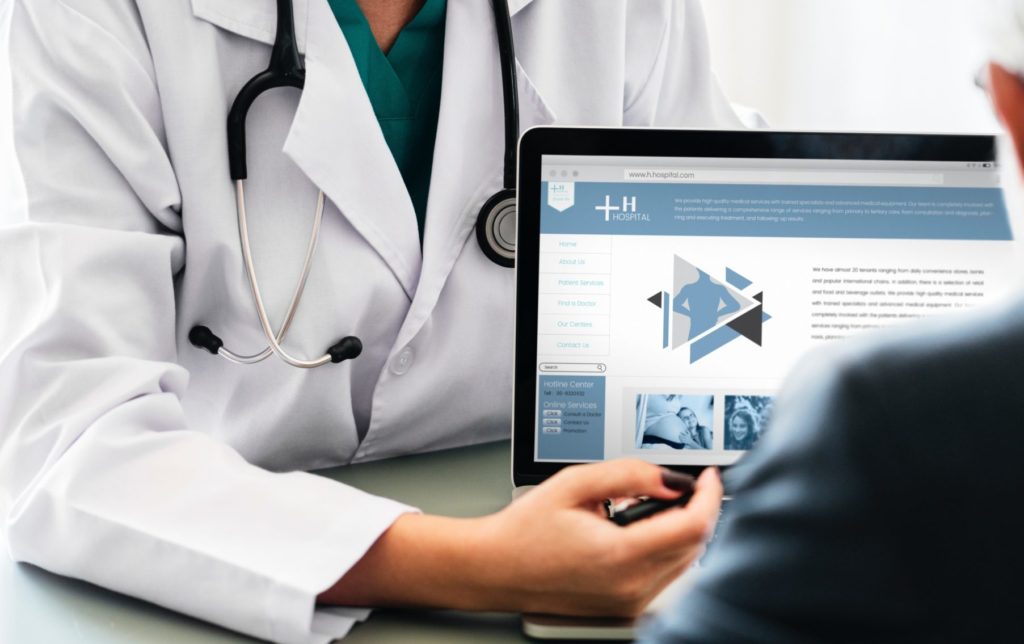 This post is part 4 in a series of posts describing our family's story. In part 1, I shared the beginning of our pediatric medical adventures with our son's lesion on his chest, multiple rounds of testing, and eventual diagnosis of Langerhans cell histiocytosis. Part 2 describes M's birth and first few months of life, when the symptoms of her genetic disorder began to impact our daily life. Our cross-country move and battery of testing for M is explored in part 3, including the agonizing wait for an answer to genetics testing. In this post, I'll discuss our genetic disorder diagnosis, the process of adjusting to it, and what the rhythm of our life looks like in our new normal.

After waiting four months on the genetic testing results, we finally had our appointment on October 25, 2017. They told us the single most important piece of information we could learn about M, and yet told us very little all at the same time.

They shared with us that she had a genetic disorder that did not yet have a name in the medical literature, but was on gene PPP2R5D. This disorder was discovered in 2014 and only had less than 30 documented cases in the medical literature. On top of that, M's specific genetic variant on this gene was completely unique: many of the other cases were identical, but the letters missing and replaced in M's sequence did not match any other case. She was literally one of a kind among the rare.

There was no treatment or cure, they told us. There was very little known, so they said to keep doing our therapies of 3 total per week and come back in a few years to see if there was anything new. There was a wide variety of presentations with this disorder, some more severe than others. M appeared to have a milder version, but of course it was early on. In addition to her symptoms we were already seeing - low muscle tone, developmental delay, and large head size - we would see some level of intellectual disability. Some of the children walked, some didn't. Some talked, some didn't. Some had more complications with their heart, eyes, or digestion, and some didn't. Much would have to be figured out as we went.

We walked out of that appointment feeling the weight of inertia of a lifetime of impossibilities pulling us into heartbreak. It was a day as significant as my kids' birthdays or the death of loved ones - our lives were permanently altered, and there was no going back. 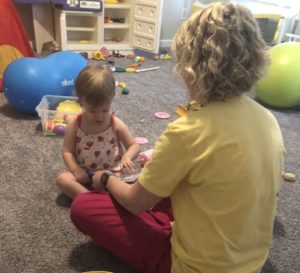 Within a couple of hours, we had joined the Facebook group for the PPP2R5D families, and found out M was diagnosis #71 in the world. We were instantly connected with dozens of other families worldwide who welcomed us so graciously, understanding exactly what we were going through and filling in the blanks for the information the genetics team didn't have. There was already research in full swing, there was a strong nonprofit behind all of it, and there was a conference coming up in March that we could attend so we could participate in the research and meet the other families. We also learned the easier name for the disorder - Jordan's Syndrome. M's variation of the disorder remains, so far, completely unique.

We reached out to the lead researcher on this disorder, Dr. Wendy Chung, who graciously called us within 24 hours to help us understand what we needed to do to help M. Her message to us was shocking: M needed at least 10 therapies per week, especially before the age of 3 since the neuroplasticity of the brain is much higher during these formative years. We were dumbfounded. I had never heard of anyone having that much therapy. Our therapists were just as surprised as we were. 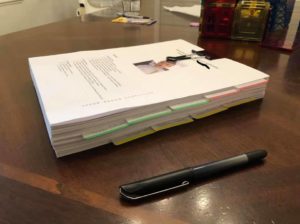 I thought we had been busy at 3 therapies per week. I was wrong. Within a few weeks, we had increased therapies and I took on a new role: schedule coordinator for M's daily therapy. It was a huge adjustment for our entire family, and we lean heavily on those amazing grandparents we moved closer to in order to execute the logistics. As of right now, M continues to have around 10 appointments each week with speech therapy, feeding therapy, occupational therapy, physical therapy, music therapy, play therapy, and adaptive swimming lessons. We've worked incredibly hard to secure help from multiple assistance programs including a Medicaid inclusion waiver, private grants, and other state resources. Yes, we are quite busy. No, I don't get to slow down much. Yes, we have to get really creative and work hard to make both the logistics and the finances of that all work.

The good news is that it is working incredibly well. M started walking in November/December, which was such a gift. She has recently started really trying to talk, which was an exciting step forward after so many months of not much happening. She's moving forward in every developmental area. It may be at a slower pace and is certainly still behind her neurotypical peers, but it's happening. She is very enjoyable to work with, works really hard in her therapies, and has amazing professionals on her team who care deeply about her progress.

It has been an incredibly intense and heart wrenching journey. We have done a lot of grieving of what cannot be - for M, for our other kids, and for us as a couple / individuals. It's like we're processing a death and a birth all at the same time. A new identity - a new life - has happened, and we have to learn about it and figure out a new normal with this identity in the mix. It's also mourning the death of much that is no longer an option for our whole family. Of course there will be much that M can do, and much that we as a family will be able to do and learn and grow in, but I've learned we have to grieve the loss of what cannot be so that we can embrace what is to be.

For M, it's devastating to think about the options that will not be available to her as she grows older. There are many questions about how much her development will be impacted by this disorder, and we simply won't know until we get there. Reading, writing, math, having a job, living independently - all of these things are a question mark, and just the not knowing is enough to need time to grieve and process. Of course we are incredibly grateful that she has a milder version of this disorder. She's an overall healthy, happy kid, and we're so thankful. That gratitude doesn't change the fact that life will be more limited for her, so there is still much to grieve. The gratitude & grief have to coexist somehow. I'm learning how to hold space for both of them to coexist.

M has two older siblings whose lives have been altered by this diagnosis as well. Our oldest is anxious about whether or not M will be bullied or teased or mistreated because she is different. There is much we are not able to do for them because of our limited resources of time and finances. We're working on finding some sliver of balance in that arena, but it's never going to be equal when your sister has 10 appointments per week. As they all grow older, we readily understand that someday, we will not be here and all three of them will outlive us. Our heart is to cultivate a family culture of caring for each other so that they will continue that beyond our lifetimes, but we never want to put any pressure or unfair expectations on them. That balance will never be easy, I expect.

When it comes to Ben & me, we've realized we will have to continually fight to preserve some sense of our own identity outside of this diagnosis and not become completely lost in the vortex of the special needs reality. As with any type of grief, we will have to fight to pull together as a couple instead of being torn apart. As Christians, we have definitely struggled with the faith questions that naturally come up in this devastating type of journey. We have already leaned on a lot of support from family, friends, and rockstar professional therapists who have helped us so much, and I'm confident we will need that same level of support for a long time to come.

I plan to explore a lot of these topics in more depth in future posts, but in summary, we are now 9 months post-diagnosis. It has not been easy. We have adjusted to a great deal that we would never have signed up for. With M having a completely unique variant among just 100 diagnoses of Jordan's Syndrome in the world now, it feels as though we have somehow fallen on the needle in a very large haystack. What is this lottery we have won? It took about 6 months for me to start coming out of the cloud of grief, processing, and adjustment. I'm starting to see more glimpses of not just what we're losing, but also what we're gaining. The loss and unfairness of the odds is all I could see at first, which is perfectly normal for special needs or any type of grieving. 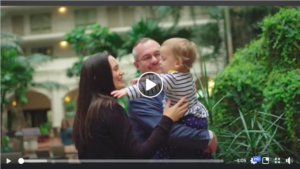 Video from the conference

Through it all, we have been so incredibly grateful for Jordan's Guardian Angels, the nonprofit that connects these amazing families with a Jordan's Syndrome diagnosis and drives the research. It was amazing to meet these folks at the conference in March. They are doing an impressive job coordinating the research and setting it up for success. The goal is to find effective medicinal treatment, gene therapy, and potentially gene editing in the future. The nonprofit hopes to fund 100% of the research costs so that any medicines or therapies developed will be available at little to no cost to those who need it. They suspect that there are thousands of others out there who have this disorder and just don't know it yet. Maybe they have a generic autism diagnosis or got genetic testing years ago before this was on the list. The gene has also been linked to Alzheimer's disease and cancer, so they hope to have a big impact on lots of lives with this research.

We've also been incredibly grateful for the support of friends and family. We received dozens of meals and hundreds of dollars in GrubHub funds pretty soon after receiving the genetic disorder diagnosis, which was like a lifeline through those very dark several months of grieving. On M's birthday, our Facebook fundraiser totaled over $6,000 to support the research for Jordan's Syndrome. The way folks have reached out, encouraged, and supported us has been a shining example of the power of even the smallest acts of kindness.

It's not easy to write out our story in words, so I'm sure it's not always easy to read, either. Thank you for taking the time to share in our special needs journey

Photo by rawpixel.com from Pexels