When wave after wave of trauma takes over your life, it can take time to put into words what has happened and why it was so difficult. I am fully aware that our story is not as difficult as the stories of some others, but our experience has been nonetheless painful. It takes a lot of guts to bear your soul about the most heartbreaking moments of your life, whatever they may be, in an online space. Because, of course, M's story is inseparable from my story. So sharing about her is inevitably sharing about me - my worst fears, my dashed hopes, my darkest moments.

The intense season of medical adventures with our family begins in the summer of 2016. We lived in the Brighton neighborhood of Boston in a house we adored. N was 8, A was just under 2, and life was pretty fun. I was working part-time from home, homeschooling, and keeping busy. Parenting was something I was sincerely enjoying and felt confident I was good at, so I was ready to keep it going. We decided to try for a third kiddo, and for whatever reason it didn't take long this time (it had been a much longer process with #2).

One day while eating lunch, I looked over at A and saw something odd. He had a bump on his chest, right on his sternum, and I was stumped as to where it had come from. It wasn't red, or swollen, or warm to the touch. It was about the of a golf ball in diameter and hard (bony). When I touched it, he didn't get upset or complain. It was a Friday, so I decided to keep an eye on it for a few days and take him to see the pediatrician Monday if it didn't go away on its own.

Monday arrived and the bump was still there, unchanged. I made an appointment, packed up my two kiddos, and trekked to the doctor's office. I fully expected them to have a very reasonable explanation and send me on my way home within a few minutes. I was probably being overly paranoid, I told myself, but better to just get it checked out and know for sure.

The pediatrician walked in, took a look at his chest, and immediately sent me down the street to have an X-ray. She was stumped, too, and it was clear to me that she was trying to keep me calm even though she was very concerned. Of course I couldn't stay right with him for the X-ray because I was pregnant, and try explaining to your under two year-old that they have to keep still in this big empty room all alone with large machines pointed at them. We had one car, Daddy was at work, so the only adult was one that couldn't stay right with him for the X-ray. That was tough.

We went back to the pediatrician's office to review our X-ray results, which showed that he had a fracture to his sternum and it was protruding outward. Now, I learned much more about sternal fractures than I ever cared to know, but it's actually really difficult to break your sternum. You have to get kicked by a horse or have a pretty good fall on a protruding blunt object to accomplish it, and then it fractures inward, not outward. What in the world would have caused it to fracture outward? The pediatrician made us an appointment with a thoracic surgeon at Boston Children's Hospital first thing the following morning.

This time, Daddy came too, and so began six months of appointments, tests, and lots of unknowns. We did every test under the sun, some multiple times: blood work, X-rays, CTs, PET scan. You name it, we did it. The thoracic specialist was stumped but narrowed it down to two options: unknown injury or cancer. Both of these were terrifying: either we might get reported to family services because our child had a broken bone we couldn't explain, or he had cancer. His second birthday was in September. I wondered if it would be his last.

Since this specialist wasn't sure what to do, we just did additional scans to see how it changed. It seemed to be getting slightly smaller, but that didn't answer the question of what it was or why it was there. 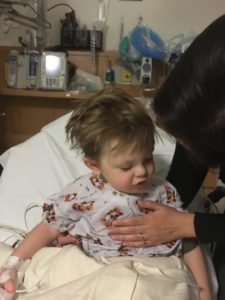 Our groggy little guy waking up from sedation.

Finally, the stumped specialist took our case to an interdisciplinary luncheon and shared it with the group. The oncology team raised their hands and had another explanation: Langerhans cell histiocytosis, or LCH. There are few people in the world who know what that is, because it is very rare. It's a mutation of white blood cells, so is handled by oncology, but it's not destructive in the way cancer is. These mutated cells collect in certain places, and can cause minor damage depending on where they gather. In our case, they broke A's sternum from the inside. But as long as it's caught and monitored/treated, it's not usually detrimental in the long term. Sometimes, it goes away on its own, which is what happened with A and why the bump was getting smaller. If treatment is needed, they use a mild form of chemo to knock out the mutated cells. It's a very little understood disease that seems to be outgrown once the patient is out of adolescence.

They did a couple of additional scans to see if there were any other sites on his body, and found what they thought was one on his spine that had also resolved itself at some point, of course completely unknown to us. The assumption was that he had two LCH sites that healed on their own, so statistically it was likely he would have another. We began regular visits to the oncology team for monitoring and blood work to see if any additional sites popped up.

We had an answer that was as good as we could hope for, and we were incredibly grateful. The experience of the unknown and all of the testing for multiple months before finding a resolution had been traumatic, however. He had to be sedated for everything beyond an X-ray, which is just so hard when they're so little. And I couldn't even be with him because I was pregnant, in one case unable to hold him for hours afterward because of the radioactive injection in his system. He was little, and scared, and tired of needles and 'pictures.' I was, too.

Just when we had an answer for what was going on with him, our oldest had a spike in behavioral issues. She was lashing out, even hitting me at times, which scared me since I was pregnant. We started getting professional counseling help for her. It took some time to sort through what was going on, but now we know that she was starting to display signs of clinical anxiety, and understandably so. Her family had just been through a traumatic season that she barely understood at age 8 with countless medical appointments for her little brother, and she desperately needed help recovering from it.

At the same time N's anxiety started to really escalate, the toll of everything caught up with the adults and our marriage completely derailed. We could barely speak to each other. We started seeing a marriage therapist.

Through all of this intensity, pregnancy #3 continued to progress. Between the relational issues with our marriage, my oldest hitting me, and medical concerns with #2, I felt zero safety in my life. I was incredibly doubtful that our family would be able to survive the birth of another baby, yet the due date was coming and there was no slowing it down. This unending, intense level of trauma is the backdrop of my pregnancy with M. As you have likely guessed, there was no time to recover from any of it before we were facing atypical challenges with a newborn. We desperately tried to repair our marriage and keep our kids afloat.

Focusing on M's part of the journey, it's strange to look back on her birth and the time leading up to it. There were so many things that I recognized were different from my other two pregnancies, but I had very reasonable and normal explanations for. Now I know that many of these were the result of her genetic disorder symptoms, low muscle tone being the most significant one impacting her early days of life.

During my pregnancy, for example, I remember noting that I wasn't being beat up nearly as much as my other two kids with kicking, punching, and general baby gymnastics. I had other very reasonable explanations for this difference in my mind, but looking back I see now that it was the first example of me noting her low muscle tone. 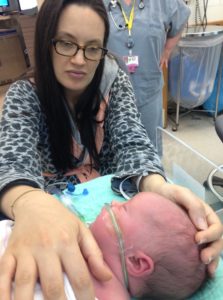 Our newest little one beginning her medical adventures

The birth was very difficult for me. It took a long time for things to really kick in gear, but once they did, it went lightning fast and I wasn't sure I would survive it. This was my third natural delivery (meaning no meds at all) and it was by far the hardest. I went from 7cm dilated to a delivered baby in 20 minutes, and it went so quickly and so intensely, I thought I might come physically unglued. She was a big baby (10.5 lbs), and she was beautiful, and I successfully delivered her by keeping my eyes on the prize of holding her, only to have her whisked away because her oxygen levels were very low. Here was another piece of evidence of her low muscle tone in her first minutes, but of course it was too early for us to see it. I was so shocked by the fast delivery and heartbroken to not be able to be with her, that was all I could even attempt to process.

A very kind nurse helped me get into the nursery as soon as possible, so I could at least touch her, even if I couldn't hold her. That's what the picture to the right captures. It's not a pretty picture or well-framed, but when I see it, I instantly feel the difficulty of that day.

Her oxygen levels came up enough for me to hold her about five hours after she was born. We started nursing, it seemed to be working well, and there were no further complications, so we were sent home the next day.

I'll share more of our family's story - M's symptoms, the process of finding a diagnosis, and our current therapy progress - in this series. Feel free to read along if you'd like to know more about our journey so far.

Photo by Andrew Neel on Unsplash