This is Part 2 of a series sharing our family's special needs journey so far. In Part 1, I described the events leading up to M's birth - our son's medical scare and eventual diagnosis of Langerhans cell histiocytosis, the toll that took on the family, and the crisis point we were already in before M was born. In this post, I'll describe the first six months of M's life, when her genetic disorder started to very clearly show symptoms and significant complications.

The first weeks of M's life after coming home from the hospital were a normal blur of newborn sleep deprivation. Overall, though, sleep was going reasonably well, nursing seemed to be successful, and she just had the sweetest temperament. We were living in Boston at the time, and we had a pretty constant flow of family and close friends come to stay and help the first four weeks. Nursing wasn’t hurting like it did with my first two kiddos, and I thought maybe I finally had gotten the hang of this newborn thing with #3. I was tired, but I was enjoying the newborn snuggles, knowing this would likely be my last baby.

At around 6 weeks of age, I remember some things started to shift. She was more fussy, wasn’t resting as well, and would cry when feedings ended. She acted hungry really quickly after each feeding. All of these things could have been explained with reasonable causes like sleep regression, growth spurts, and general development. But at her 8-week check up with the pediatrician, she had gained length but lost 0.5 of a pound. When you’re only 11 pounds, losing half of a pound is quite a lot. At first I thought that the scale was broken or the previous weight measurement was wrong. Oh, how I wish the explanation had been that 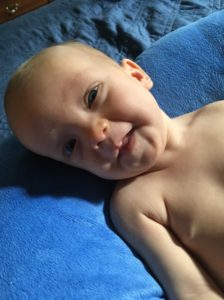 simple. The pediatrician insisted that I come back in one week for another weight check. I was sure she was being overly cautious. I was very wrong. That week, I nursed longer and more frequently, but I realized that she wasn’t actually sucking for very long - she was giving out a few minutes into nursing each time. I took supplements and did everything I knew to boost my milk supply, and hoped it was enough.

The weight check came the next week, and she had grown longer, but continued to lose weight. You could count her ribs. The attached picture is from around that time - she was so thin and it was obvious she wasn’t getting enough. The pediatrician told me it was time to bottle feed and increase the number of feedings. Having placed such a high value on nursing exclusively, I felt like a huge failure. They let me have the room at the pediatrician’s office so I could finish my crying session and calm down before having to drive home. They gave me one week to start getting her weight back up before they were going to hospitalize, hook her up to an IV, and diagnose her with failure to thrive. I was terrified.

I called a dear friend who was a lactation consultant and begged her to help me figure things out. She took one look in M's mouth and saw that she had a high vaulted hard palate, which prevented her from being able to latch properly. She also pointed out her overall low muscle tone. My friend sent me home with a few bottles and a scale so that I could weigh her every couple of days and make sure the numbers were going in the right direction. The hope was that, once she was getting enough calories each day, she would gain weight and muscle back to get stronger all around.

We went home and tried to figure out bottle feeding an infant who wasn’t sucking well. At first, it took her a solid 90 minutes to finish 4 ounces of milk. Two month olds only stay awake for up to 90 minutes at a time, so that was literally all we had time for and then she was ready for a nap. I was desperate to give her all I could, so as soon as I put her down, I would pump whatever breastmilk I could. I was feeding her at 10PM and 4AM, meaning I didn’t get to sleep until 12:30 or so, then got back up at 4, then didn’t get back to sleep until 5:30AM. If you do the math, I was spending 13 hours out of every 24 on feeding-related efforts for her, and I was only sleeping at most a few hours at a time.

I weighed her every other day and clung to every fraction of an ounce in weight gain. I was anxious, scared, exhausted, and heartbroken. M's survival rested squarely on my shoulders, and it was an incredibly heavy responsibility to bear day in and day out. We were in full-on survival mode, and I still feel undeniably strong emotions when I think about that season. It’s one of those times I look back on and wonder how in the world I made it through without having a complete breakdown. I’m a person who can generally handle and juggle a lot, but I had met more than my match here. With three kids, each with some atypical issues and one whose survival was not a given, there was no room for me to breathe easy. I remember being really hard on myself if I accidentally slept through a 4AM feeding or skipped a pumping session so I could grab a nap. Those months were by far the hardest of my life so far. It was incredibly difficult to enjoy anything - I couldn’t relax, didn’t feel any level of safety, and had no idea if all I was doing was enough.

It took awhile, but slowly the bottle feeding times did improve. By 6 months, it was about 45 minutes per bottle, which is still a really long time for a 6 month-old (normal would be about 10-15 minutes), but it was much better than where we started. At that point, we still thought the hard palate was the underlying issue. We were quite mistaken, but we didn’t know it yet. There were other issues cropping up as well - she had mild torticullis, a very large head that was a bit lopsided because of the torticullis, and she was starting to miss milestones like rolling over and sitting up unassisted.

At this point, every medical professional I consulted was confident that she would grow out of the symptoms of what we thought was an underlying feeding problem. Of course we were all dead wrong, but there was no way to know it at that point. Though at first we thought it was a symptom, we now understand that M's low muscle tone was the underlying cause of all of the difficulties in her first six months. Her lack of strength caught up with her around 6 weeks and was preventing her form getting the increased amount of milk she desperately needed to grow. The low muscle tone and developmental delay associated with her genetic disorder also resulted in torticullis and missed milestones. The large head size, though at first something we thought was just a continuation of our family’s genetic pattern, was in fact symptomatic of the disorder as well.

In Part 3 of this series, I’ll share about our cross-country move, the beginnings of therapy, and the road to a diagnosis. Continue reading if you'd like to know more about our journey so far.